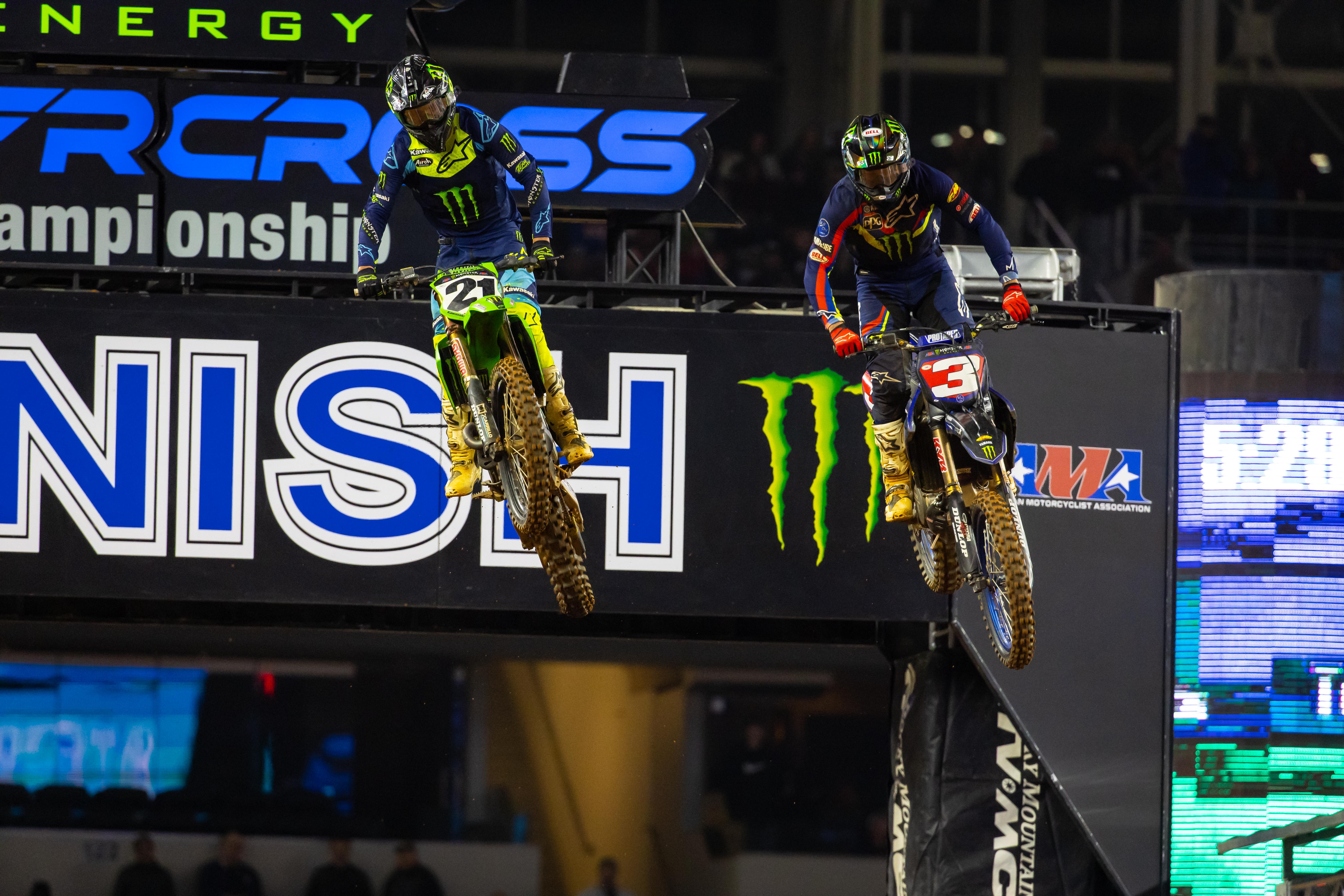 The 450SX Class started off with a wild and dramatic Race 1. Red Bull KTM’s Marvin Musquin got into the lead early but Rockstar Energy Husqvarna Factory Racing’s Malcolm Stewart quickly took over up front with Jason Anderson on his tail. Webb was back several spots while Tomac was slicing through the pack after a bad start. Late in the 12-mintue plus one lap race, with only two and a half minutes on the race clock, Anderson put a hard contact pass on Stewart and both riders hit the Texas dirt. The incident put Troy Lee Designs Red Bull GASGAS Factory Racing’s Justin Barcia in the front spot, Webb close behind, and Team Honda HRC’s Chase Sexton just out of reach of the two. On the final lap Webb pushed past Barcia under the track’s bridge jump. Webb took the win, Barcia grabbed second, and Tomac’s charge gave him the final podium spot in the first of the three races.

Chase Sexton took the early lead in Race 2 ahead of Anderson and Tomac. Webb quickly turned a mid-pack start into a top four spot and the race was on. Tomac passed Anderson twice with Anderson dramatically passing him immediately back, reminiscent of their Anaheim 3 battle. At the race’s midpoint Anderson took over lead from Sexton. Two and a half minutes later Tomac was also around Sexton. The Honda rider fought off Webb’s pressure to hold the spot through the final laps. The results put Tomac and Webb tied with five points and Anderson and Sexton tied with seven points going into Race 3.

At the final gate drop of the night, Rocky Mountain ATV/MC WPS KTM’s Shane McElrath took the point spot early with Tomac and Anderson on his fender. Webb ran into trouble and was way back in the first corner while Team Honda HRC’s Ken Roczen and Musquin were involved

in a first turn crash. Less than a minute into the race Tomac moved to the front; Anderson pushed past McElrath soon after. Malcolm Stewart got into third a few laps later but was ten seconds back. The gap allowed some games as Tomac slowed to block Anderson’s pass attempts. With just under five and a half minutes on the clock Anderson made the move into first. Tomac held close but never got by. Stewart held third as Webb closed in but had to settle for fourth.

The overall went to Tomac, his sixth Triple Crown event win. Anderson’s second overall puts him now three points back in the title chase. Webb earned third overall for the night, Sexton finished fourth, and Stewart rounded out the top five and sits in third place in the title points. 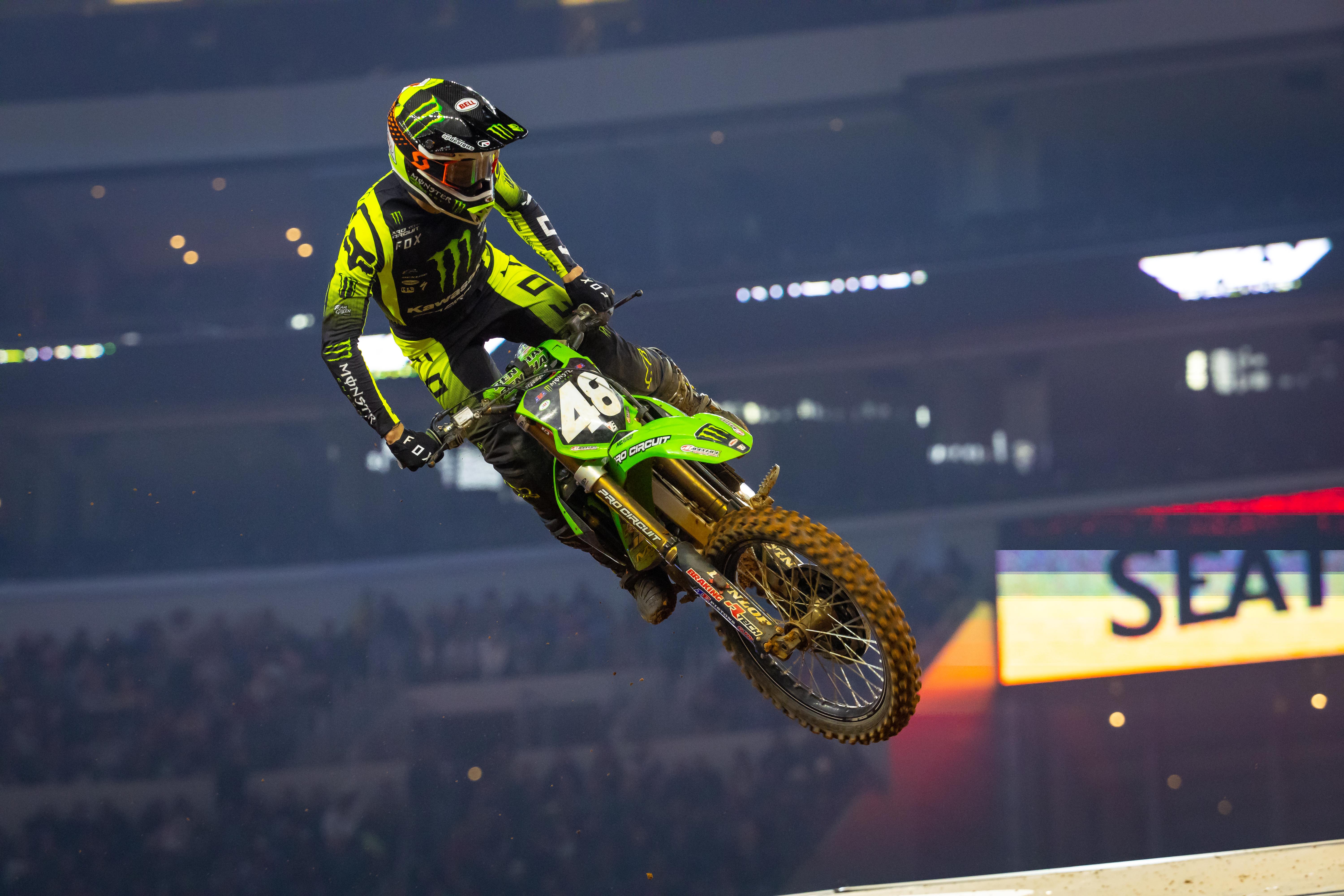 Cameron McAdoo’s consistency gave him the victory in Texas and put him into a points tie in the 250SX Class. Photo Credit: Feld Entertainment, Inc.

The 250SX Class Race 1 was a thriller. After holeshotting, Team Honda HRC’s Jett Lawrence fell in the second corner and dropped to the back of the pack. Jett put on an inspired and aggressive charge through the remainder of the race, passing up to the rear wheel of third place finisher Rockstar Energy Husqvarna Factory Racing’s RJ Hampshire. Up front, Monster Energy Pro Circuit Kawasaki’s Austin Forkner ran in third for the first four minutes of the 10-minutes plus one lap Race. He moved past his teammate McAdoo then both Kawasaki racers got around race leader Rockstar Energy Husqvarna Factory Racing’s Stilez Robertson. Forkner took the win with McAdoo second, Hampshire third, and Lawrence fourth. In Race 2 Lawrence was again up front at the start and wasted little time taking over the lead and checking out. Behind him, Robertson held second with Monster Energy Star Racing Yamaha’s Jeremy Martin and Kawasaki racers Forkner and McAdoo right behind. In a repeat of Race 1, Forkner and

McAdoo passed Robertson nearly together. This time McAdoo finished ahead of his teammate. Lawrence’s win put him in a three-way tie with McAdoo and Forkner going into the final race.

250SX Class Race 3 was another for the record books. Lawrence slid out in the first turn and began the race in last place for the second time of the night. Muc-Off FXR ClubMX Yamaha’s Jace Owen grabbed the lead ahead of Troy Lee Designs Red Bull GASGAS Factory Racing’s Pierce Brown, McAdoo, and Martin. Forkner was just inside the top ten as Lawrence started picking off riders from the back. Just past the midpoint McAdoo held an uncontested lead and Brown had second place locked down. Forkner reached third with Lawrence unbelievably right behind. Lawrence was on a mission, bouncing wildly through the whoops and past Forkner. On the next section Lawrence tagged a Tuffblox on the face of the finish line jump. It sent him across the track and he and Forkner collided in mid-air. Forkner was out and Lawrence ended the final race in tenth. McAdoo won the race and the overall. It moved him into a points tie with Lawrence after two rounds in the division.

The series heads to Daytona International Speedway for Round 9 of 450SX Class racing and Round 3 of the Eastern Regional 250SX Class championship. The Florida event marks the first of two speedway venues of 2022. For more information on ticket, video recaps, the series schedule, and airtimes to catch the action on Peacock, NBC, CNBC, and USA Network check out SupercrossLIVE.com. 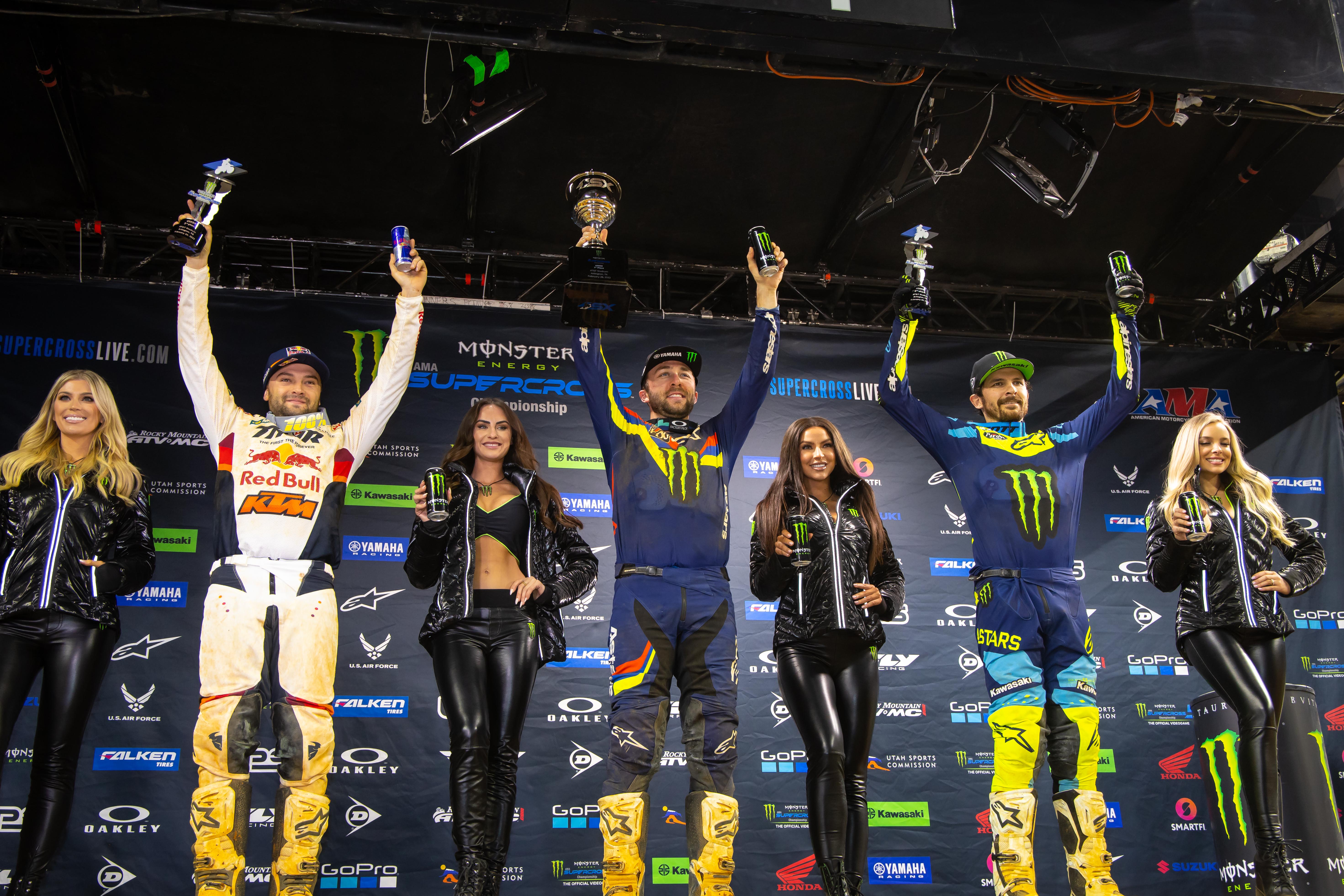 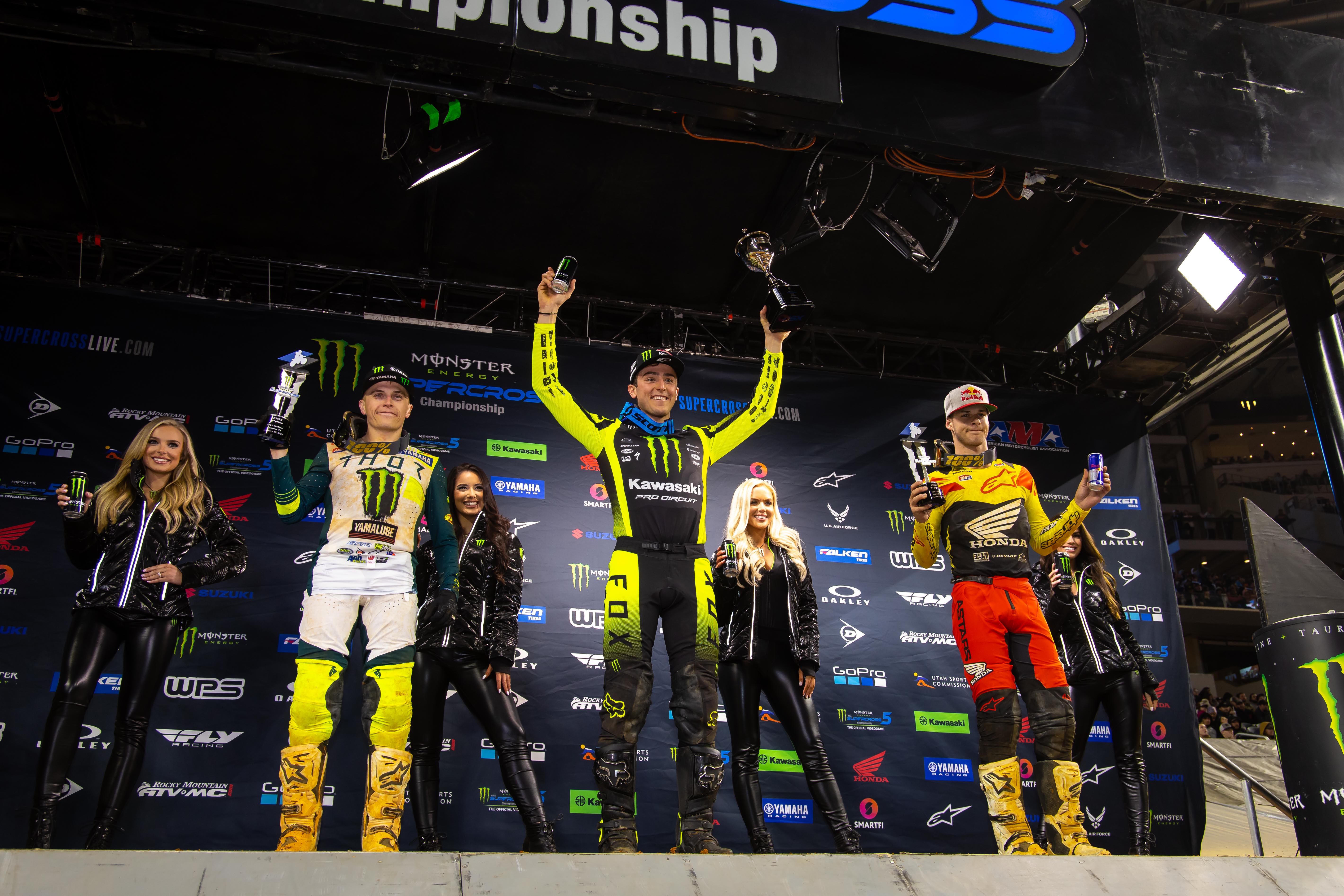