Monster Energy Star Racing Yamaha’s Eli Tomac grabbed a historic sixth Daytona Supercross win with a dramatic late-race pass for the lead at Round 9 of the 2022 Monster Energy AMA Supercross series. The victory marked Tomac’s fourth win of the season and stretched his points lead to 18. 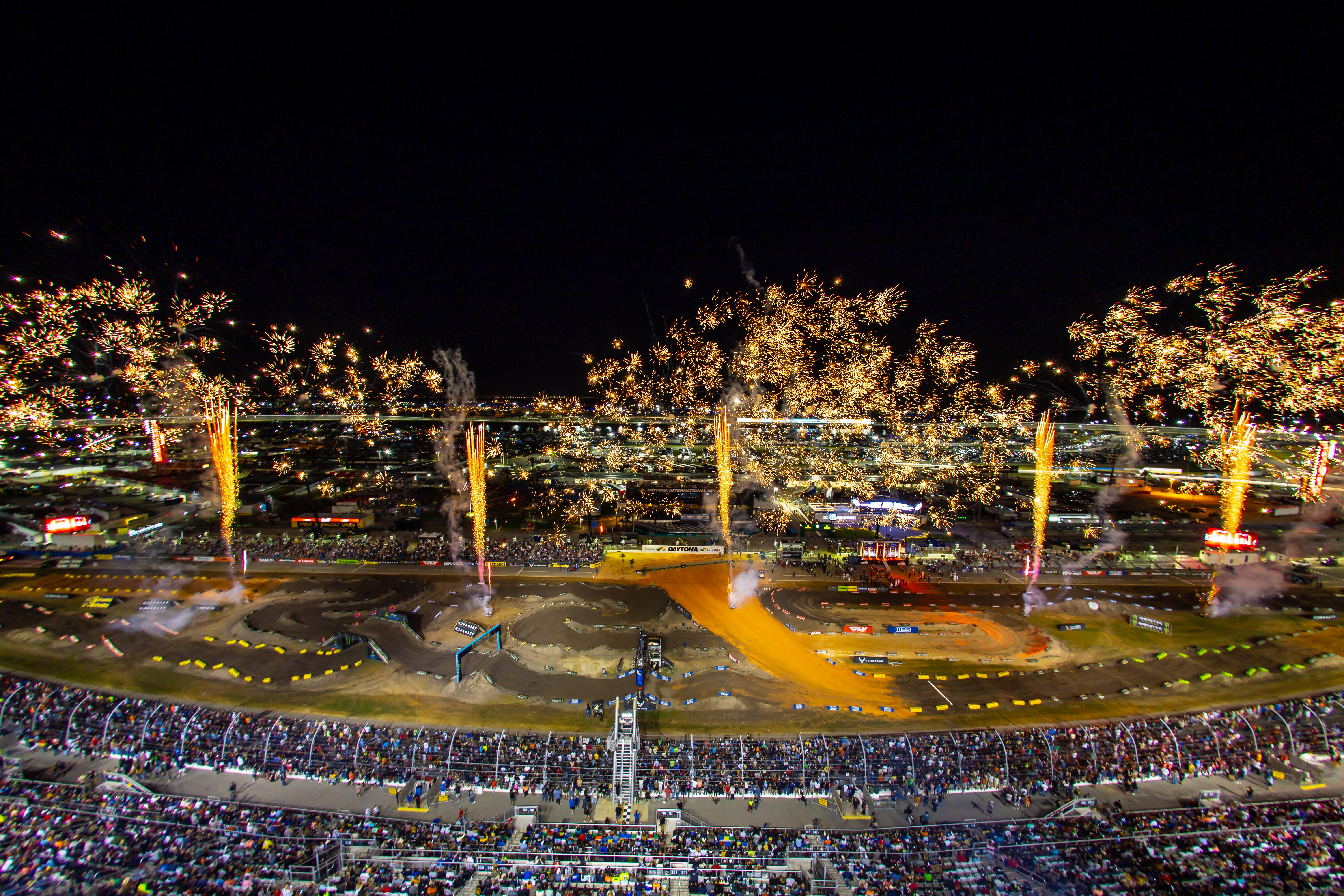 After leading most of the race, Red Bull KTM’s Cooper Webb went home matching his best finish of 2022 with a second-place spot. Team Honda HRC’s Chase Sexton ran up front with a steady ride that earned him the final podium position. In Round 3 of the Eastern Regional 250SX Class, Team Honda HRC’s Jett Lawrence dominated the field, taking home the win at his first Daytona Supercross appearance and breaking the points tie to become the sole red plate holder in the class. 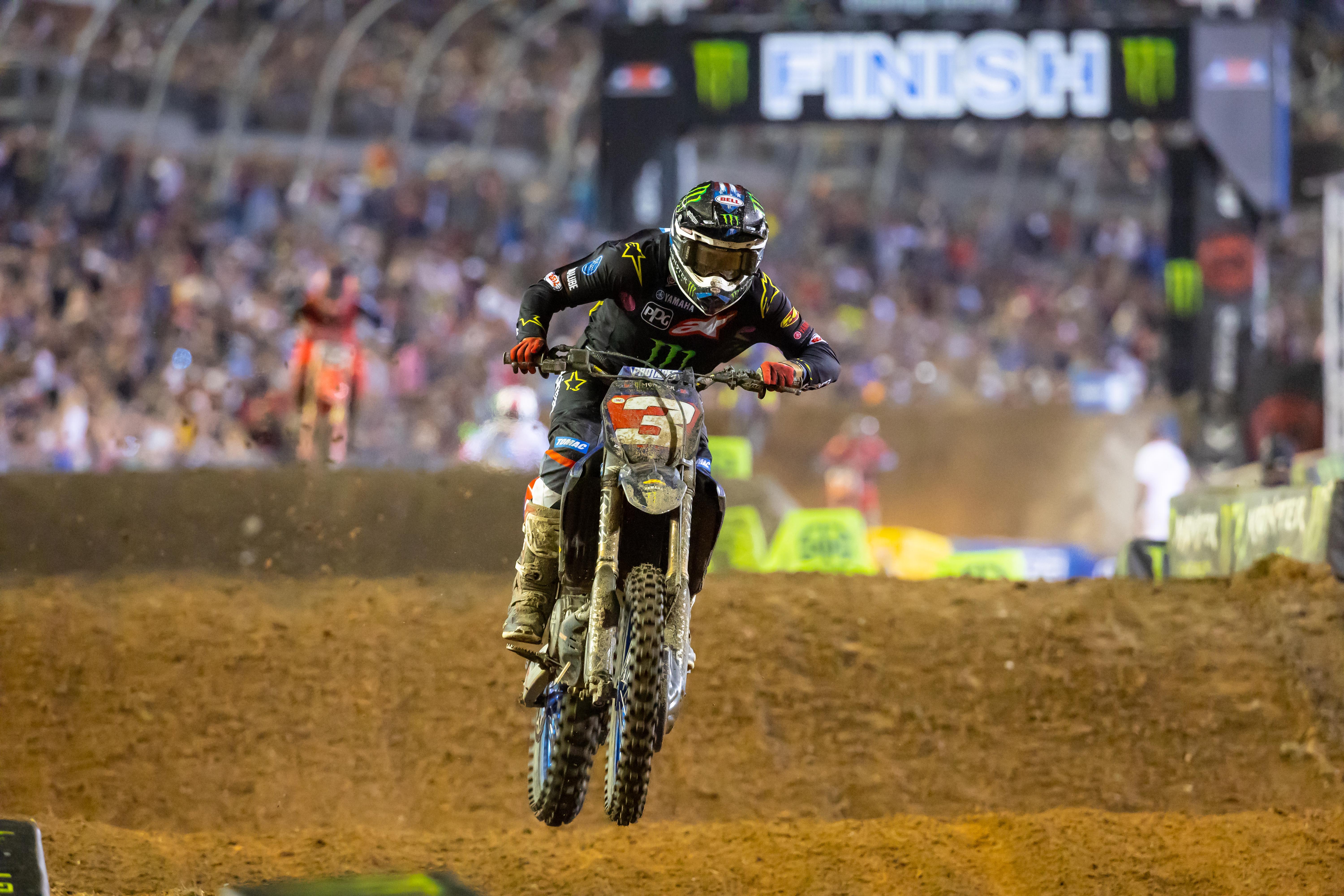 Cooper Webb shot out of the gate with a decisive Holeshot in the 450SX Class Main Event. The race excitement spiked down the first rhythm lane as Rockstar Energy Husqvarna Factory Racing’s Malcolm Stewart jumped into second place. Next, Tomac attempted to cut under Stewart in turn two. Monster Energy Kawasaki’s Jason Anderson came in hot under both riders and the three sandwiched together then split apart like billiard balls on a break. None went down as they scrambled to get back into the race. The incident put Anderson in second and Stewart behind him in third.

Just one corner later, in only the third corner of the race, Anderson cut across the sandy inside rut and collided with Stewart. This time both riders went down, nearly in a replay of the altercation between the two riders the weekend prior. From there Stewart and Anderson scrapped, came together once more, and both hit the ground again as each tried to claw forward for points without giving quarter to the other.

Out front and ahead of the chaos, Cooper Webb put in precise laps on the deteriorating track and kept the #1 plate clean for most of the race. Chase Sexton hung behind him, matching Webb’s pace in the early laps of the race with Tomac just behind Sexton and Troy Lee Designs Red Bull GASGAS Factory Racing’s Justin Barcia nearly in position to make a run for Tomac’s spot. Six and a half minutes into the 20-minute plus one lap race the top three were barely separated by two seconds on a track notorious for forcing costly mistakes.

Then, with eleven and a half minutes on the clock, Tomac made his way past Sexton and set his sights on Webb. The gap alternately grew and shrank for several laps, often holding at less than a second between the top two riders as they weaved their way through lappers and contended with deepening ruts and growing bumps. On top of it all, Tomac’s bike started spitting smoke from its engine overflow tube, often an indication of an overheating clutch.

With 45 seconds left on the clock Webb was cut off by a lapper and Tomac was in the perfect position to seize the moment. From there Tomac eased out of striking distance from a re-pass by Webb and took his Yamaha to a historic sixth victory at the Daytona Supercross, more than any rider in the venue’s 52-year history. 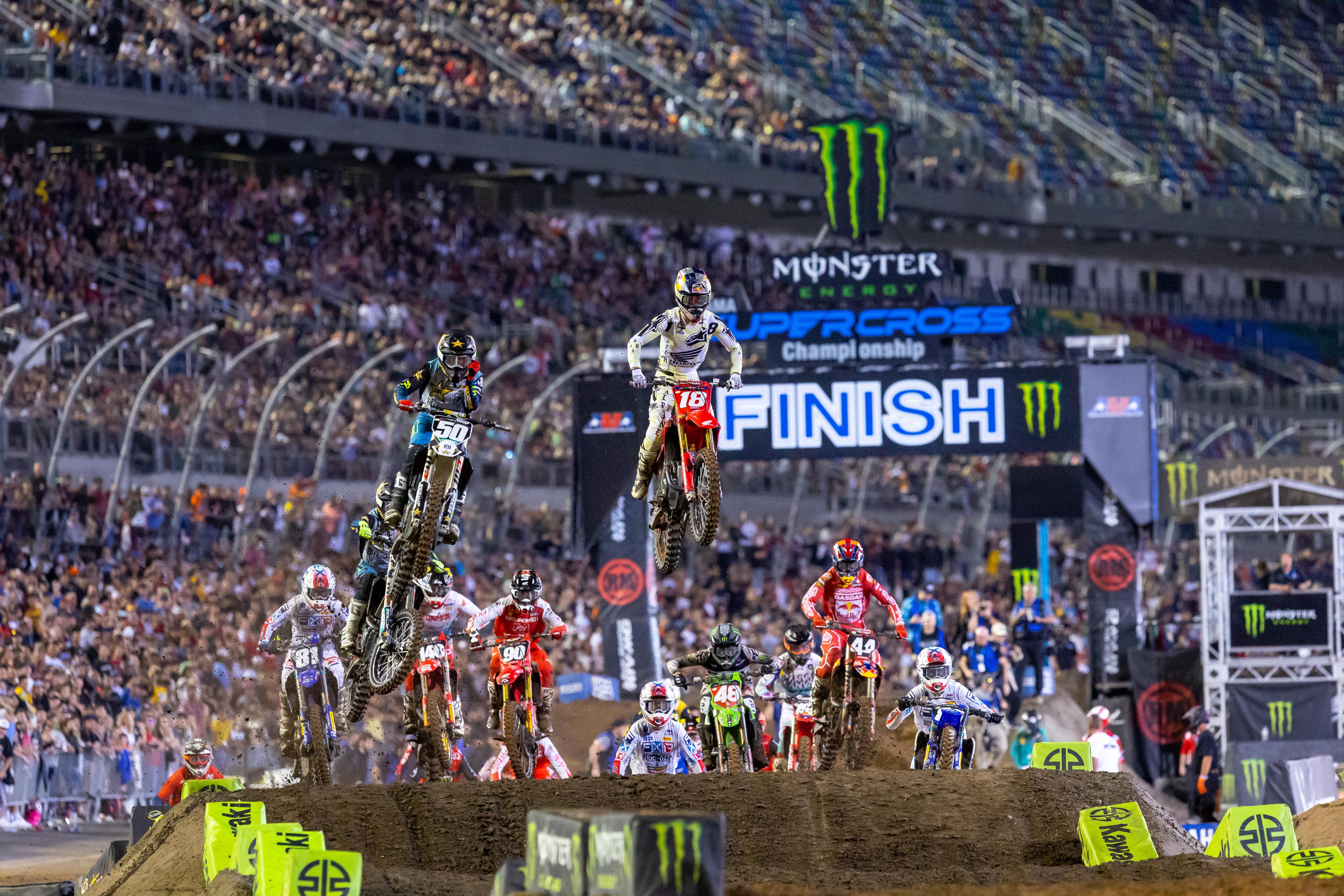 The Eastern Regional 250SX Class also delivered amazing racing. Rockstar Energy Husqvarna Factory Racing’s Stilez Robertson captured the Holeshot but Jett Lawrence was into the lead before they’d reached the second turn. Midway into the first lap, Lawrence was already pulling a gap on the field, Robertson held strong in second, and Muc-Off FXR ClubMX Yamaha’s Enzo Lopes sat third. Monster Energy Pro Circuit Kawasaki’s Cameron McAdoo, last year’s winner and sitting tied for the points lead, ran outside the top five but was on the move. The battle for the final podium spot was dramatic for the duration of the race with Muc-Off FXR ClubMX Yamaha’s Phil Nicoletti, Rockstar Energy Husqvarna Factory Racing’s RJ Hampshire, and Troy Lee Designs Red Bull GASGAS Factory Racing’s Pierce Brown having a throw down battle that alternately saw each rider making moves forward amid their group. When the night dust settled McAdoo had secured the final podium spot behind Lawrence and Robertson.

The Supercross series heads north to Ford Field in Detroit, Michigan for more of what’s already proven to be a wild and exciting season for both classes. Fans can find the full schedule, ticket sales information, highlight videos, race news, and airtimes on Peacock, NBC, CNBC, and USA Network at SupercrossLIVE.com. 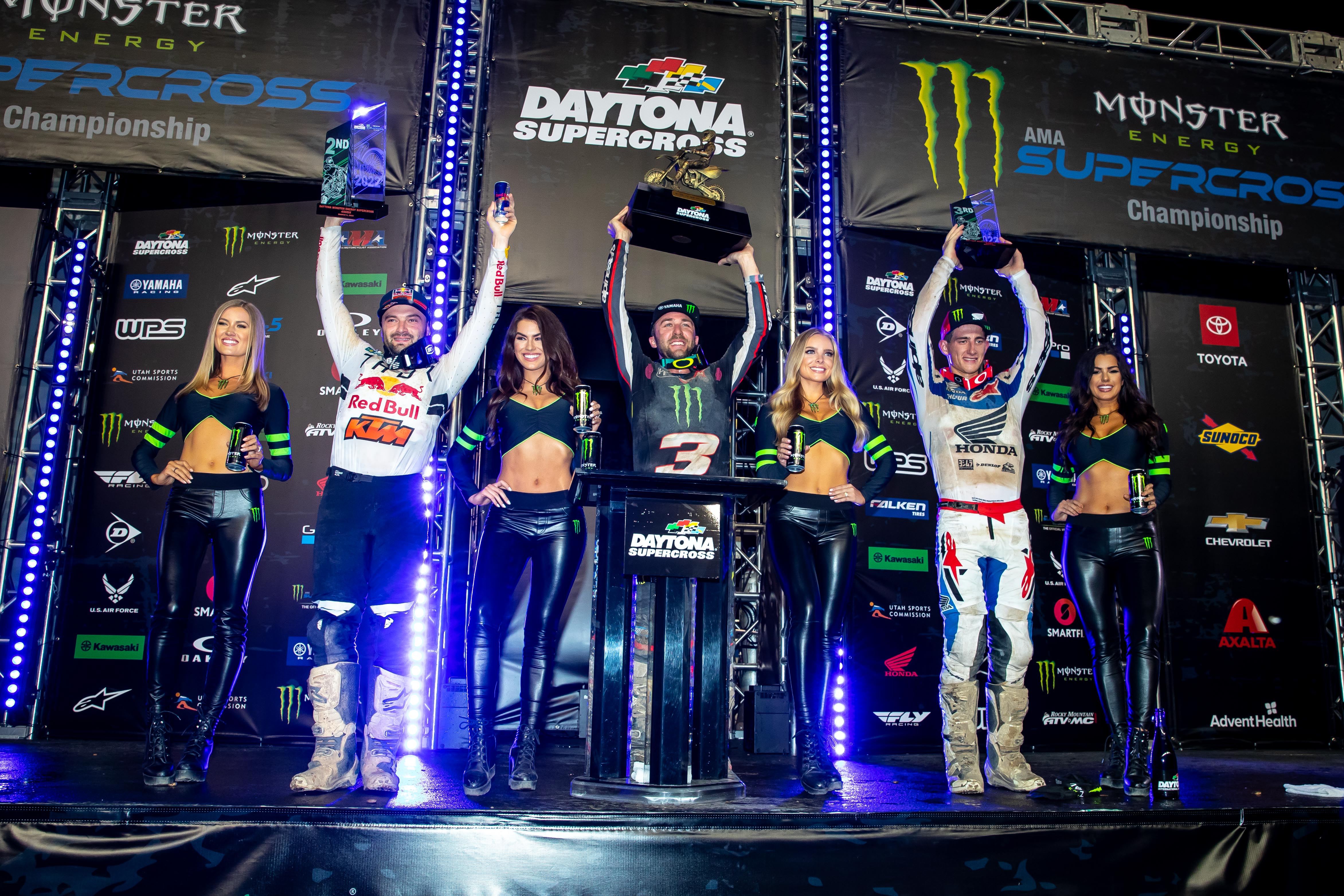 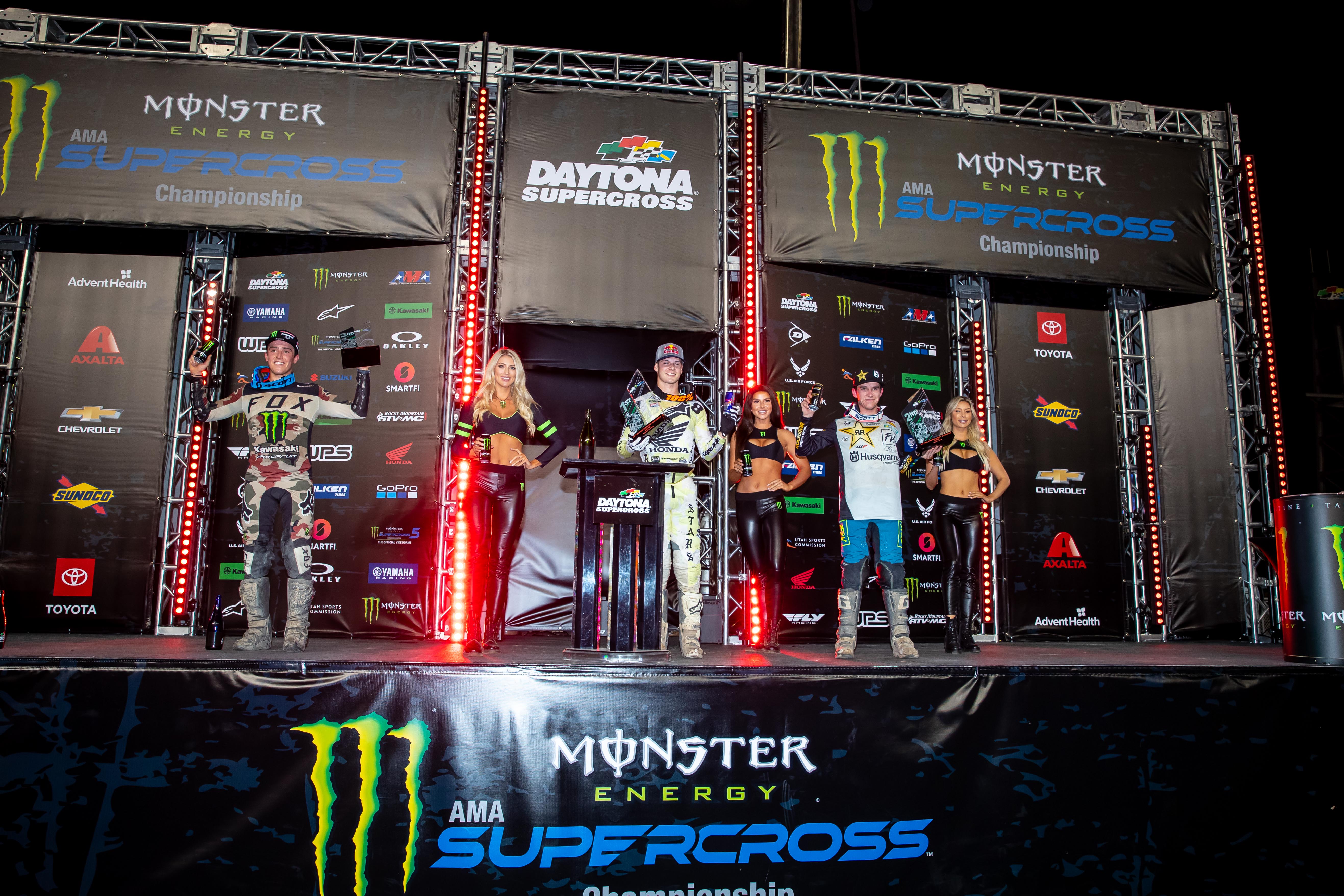